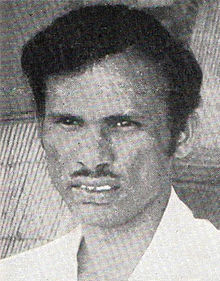 Pochiah Krishnamurthy aka Pallamononi Krishnamurthy was a tidy glove-man of Indian Team from Hyderabad, who enjoyed standing up even to fast bowlers. His short-spanned carrer include five tests and one ODI.

Krishnamurthy played his first Test against West Indies in 1970-71 under the captaincy of A L Wadekar followed by England and Ceylon tours.

He represented Hyderabad for 12 seasons in the Ranji Trophy Championship. He was also associated with the Hyderabad Blues team and toured all cricket playing countries. He was the only batsman to have batted in all eleven slots, also being associated with a century partnership while batting at number one and eleven.

Krishnamurthy served as the chairman and selector of the Hyderabad Cricket Association and died at the age of 51, in his hometown.