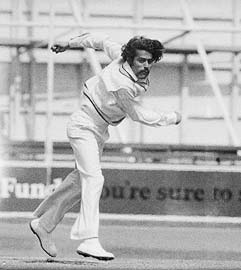 Bhagwat Subramanya Chandrasekhar, a rare jewel of Indian cricket, with a withered polio arm, specialized as a leg spinner. During the 1960s and 1970s, he along with Bhishen Singh Bedi, E.A.S. Prasanna, and Srinivasaraghavan Venkataraghavan formed the Indian Spin Quartet (Bowlers), which bought many wins abroad.

Chandrasekhar was born in Mysore where he completed primary education. At an early age, a passion for cricket developed in him idolizing Australian leg spinner Richie Benaud. Chandra shifted to Bangalore (now Bengaluru) with family starting his playing career with “City Cricketers”.

On his Test Debut at Bombay, he took four wickets and became a crucial part of Team India. His 6 wicket haul for 38 runs at Oval in 1971, was instrumental in India’s first win in England. Wisden attributed this bowling spree as “Indian Bowling Performance of The Century”.

However, he was not too adept in batting, scoring more than 23 ducks in his career, also being the recipient of the special “Gray-Nicholls Bat” during his Australian tour. The hole in the bat commemorated his four ducks in the series.

Besides, suffering from polio since childhood, he was also a victim of a severe accident that almost left him paralyzed, However, his will power and indomitable spirit kept him going.